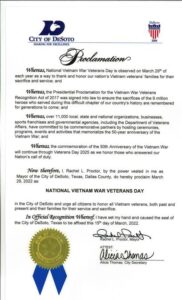 Approximately 35 people attended the lunchtime ceremony and more than half were Veterans. Eight attendees served in the Vietnam War.
DeSoto’s Mayor Pro Tem Andre’ Byrd read a proclamation on behalf of Mayor Rachel L. Proctor observing Vietnam War Veterans Day and recognizing those who served in that war. City Councilmember Crystal Chism, the Council’s Liaison to the Veterans Affairs Committee and a US Army Veteran who served in Iraq, thanked the Vietnam Veterans who were present for serving with honor. DeSoto’s City Manager Brandon Wright and Police Chief Joe Costa also attended the ceremony.
“While DeSoto loves and appreciates all of our Veterans, we hold a special place in our hearts for the Veterans of the Vietnam War who often returned home to face hostile criticism and who were not always shown the appreciation that they deserved for defending our nation,” said DeSoto Mayor Rachel L. Proctor in a statement for the event. “Vietnam War Veterans Day and DeSoto’s recognition ceremony honoring those who served allows us to pay homage to our Vietnam Veterans and to let them know that they are a part of our family and that they will always have a welcoming home here in DeSoto. “
The Veterans Affairs Committee meets on the 3rd Monday each month at 6:30 pm in DeSoto’s City Hall. To learn more about the committee visit its official page on DeSoto’s website: https://www.ci.desoto.tx.us/1867/Veterans-Affairs-Committee