India vs Sri Lanka 2nd T20I Highlights: Shreyas Iyer hit an unbeaten 74 while Ravindra Jadeja chipped in with 45 not out off 18 balls as India defeated Sri Lanka by seven wickets in the second T20 International to take an unassailable 2-0 lead in the three-match series on Saturday. Chasing 184, India rode on Iyer’s innings to chase down the target with 17 balls to spare. He was ably supported by Sanju Samson (39 off 25) as India crossed the finishing line in 17.1 overs to seal the series.
Brief Scores:
Sri Lanka: 183/5 in 20 overs (Pathum Nissanka 75 off 53 balls, Dasun Shanaka 47 off 19 balls; Jasprit Bumrah 1/24).
India: 186/3 in 17.1 overs (Shreyas Iyer 74 not out, Ravindra Jadeja 45 not out, Sanju Samson 39; Lahiru Kumara 2/31).
After a solid show from Shreyas and Jadeja, India beat Sri Lanka in the second T20I. Both the batters stood there in the middle and finished the game. Iyer made 69 runs and 15 balls 45 runs in the end from Jadeja helped India win this game.India take an unassailable 2-0 series lead ud83dudc4aThey win the second T20I against Sri Lanka in Dharamsala with seven wickets in hand ud83dude4c #INDvSL | ud83dudcdd https://t.co/rpWS0qitjC pic.twitter.com/wGLfTLhTZe— ICC (@ICC) February 26, 2022
Jadeja is looking to finish the match in haste. He hit back-to-back boundaries. IND: 174/3 after 16 overs.
2. 6. 4. 4. 4. wd. 1 – @imjadeja on 🔥#INDvSL pic.twitter.com/NdGvpKVzxZ
Jadeja smashes it over the bowler’s head. Asalanka lets the ball burst through his hands into the boundary. IND: 165/3 after 15.4 overs
Shreyas Iyer is playing a blinder. He is batting on 69 now. IND: 153/3 after 15 overs
Binura Fernando grabs a one-handed stunner to end his innings at 39. IND: 128/3 after 13 overs
Catch 🔥#INDvSL pic.twitter.com/WUCSVT841a
Sanju Samson (27*) smacks Lahiru Kumara straight down the ground for a big six. He picked up the slower ball correctly and sends it for a maximum. But he is not done yet and hits two more and makes it three maximums in the over. Samson has shifted gears. IND: 127/2 in 12.4 overs
Makes room does Iyer and slaps it beautifully over third man. Back to Back 50s for Shreyas Iyer. IND: 91/2 after 11 overs
Shreyas Iyer brings up his 5️⃣th T20I fifty from just 30 balls 🔥👏#ShreyasIyer #INDvSL pic.twitter.com/NL5qUuUCVO
Shreyas dances down the track and deposits the ball into the crowd, not once but twice in a row. Jayawickrama is under pressure. 14 from the over. Shreyas Iyer moves to 43 off 25 balls. IND: 70/2 after 9 overs
Huge six by SHREYAS IYER 🔥

Pressure-releasing SIX 🔥@ShreyasIyer15 #INDvsSL #INDvSL #ShreyasIyer pic.twitter.com/F9BpY7PRkQ
An appeal for lbw from the Lankans but there was an inside edge. Meanwhile, their speedsters are winning a lot of appreciation online.
“Sri Lankan bowling group shaping up quite well. Already a menacing unit when the first-choice blokes are available. Were very good in Australia too, the batters let them down,” writes Sam on social media. IND: 51/2 after 7 overs
Ishan Kishan lobs one to the midwicket fielder and the hosts lose two in the Powerplay. Sanju Samson has arrived in the middle to join Shreyas at the crease. IND: 44/2 in 5.1 overs
Lahiru Kumara bowls a sharp bouncer and it hits Ishan Kishan hard on the helmet. That looked nasty. The physio is out and the mandatory concussion test is carried out. A pitch that looked had nothing to offer suddenly looks like a demon. India’s habit of making it difficult continues. And they are hitting helmet bowling at 146 kmph. IND: 24/1 after 3.2 overs 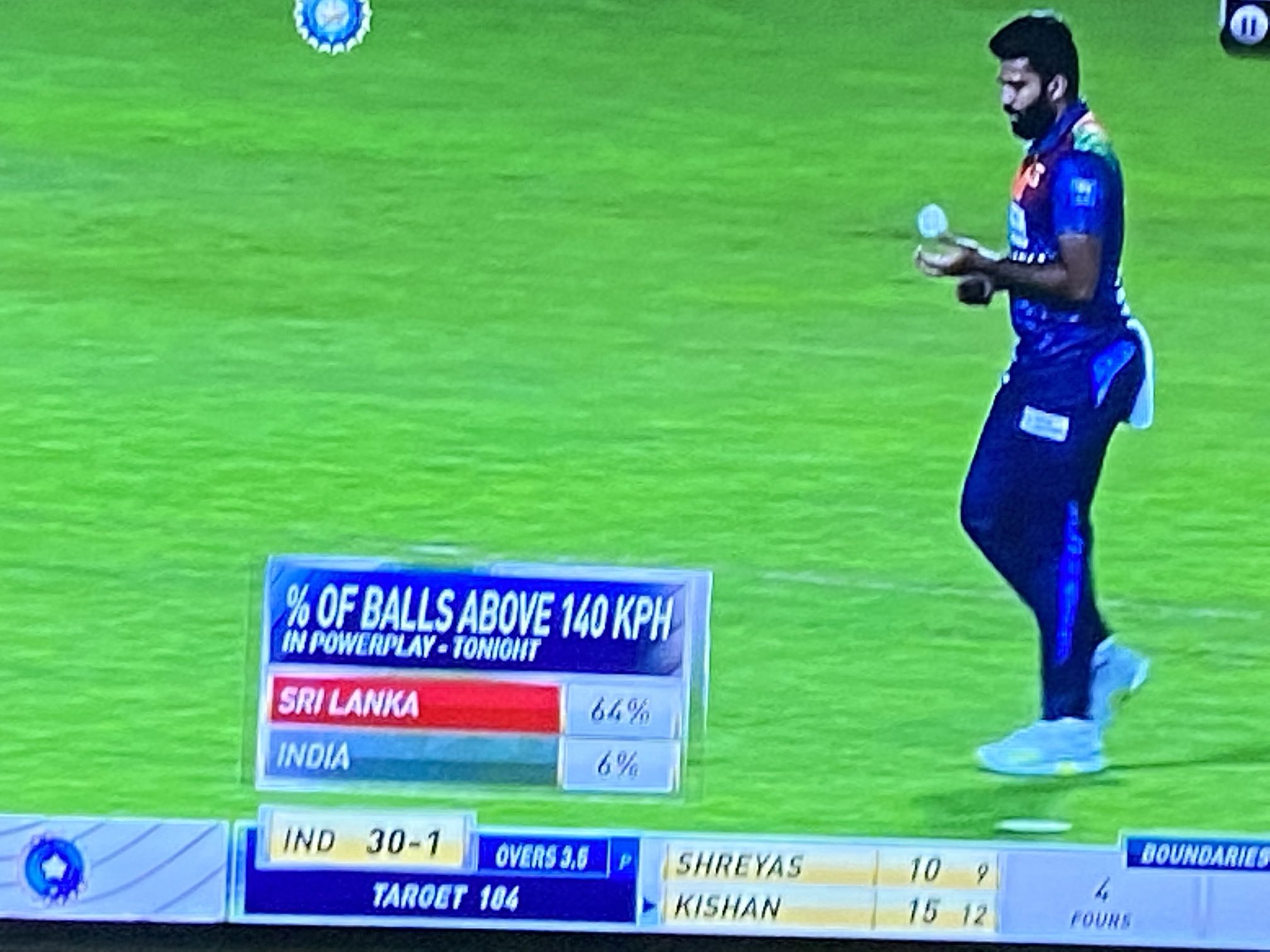 Two fours for India in Fernando’s first over. Ishan gets an edge past the slip fielder before Shreyas plays a glorious straight drive off his first delivery. IND: 18/1 (2)
Chameera has Rohit’s number once again. First over, and a big wicket for Dushmantha Chameera! Rohit Sharma edges him onto the stumps. He is gone for 1. IND: 14/1 after 1 over 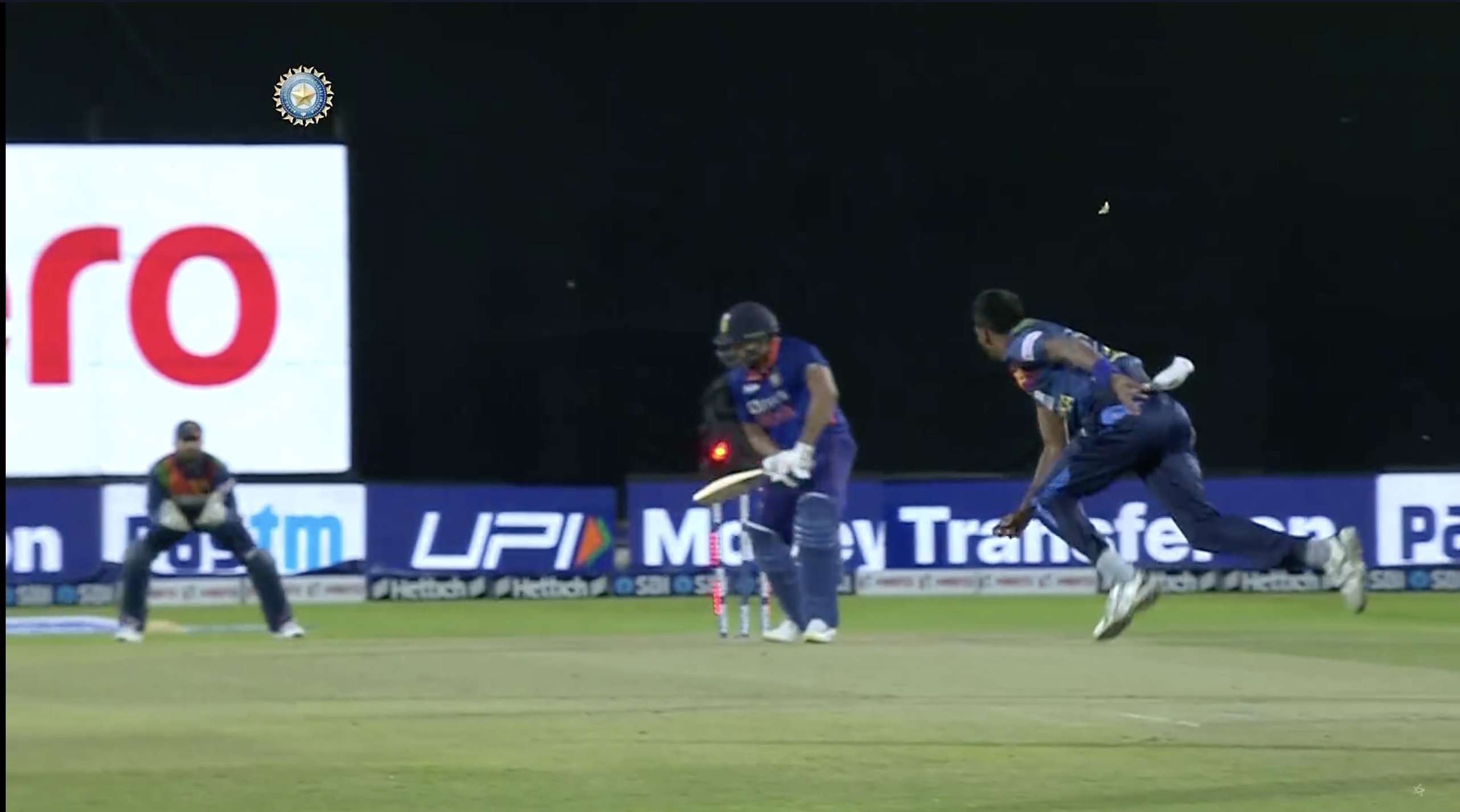 Sri Lanka have finished the innings with some big blows. fireworks from Pathum Nissanka (75) and Dasun Shanaka (47*) help Sri Lanka to a score of 183/5. Will it be enough?
Shanaka brings up the fifty stand with Nissanka in the penultimate over of the innings, while also guiding the Lankans past 150. How much can the visitors get from here? Can they get 180 ? SL: 156/4 in 18.3 overs
And a solid 50 for Nissanka! he has shown his ability to accelerate greatly post reaching that milestone in his short T20I career so far. SL would need that today. Dasun Shanka also with a few lusty blows. SL: 130/4 after 17 overs 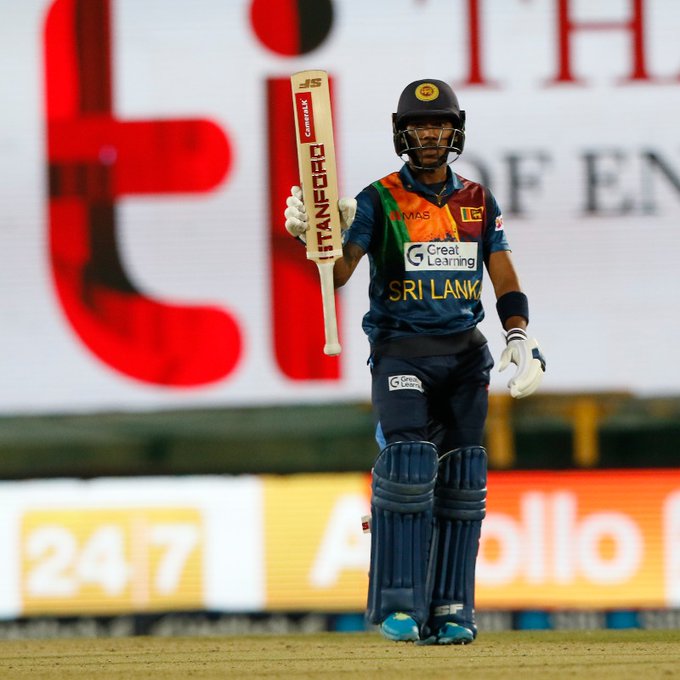 The batter chips it to Rohit Sharma at short cover and that was another offcutter from Bumrah, from wide of the crease. Chandimal shapes to drive, he plays early, and slices a drive to Rohit. Chandimal departs for 9 off 10 balls. SL: 103/4 after 15 overs
Nissanka gives Sri Lanka a much-needed push by stepping down and driving one from Bhuvneshwar over cover for four. The right-handed opener then picks up another boundary with a pull that goes fine. Pathum Nissanka (43*) hits two fours as Bhuvneshwar Kumar leaked 12 runs in the over. SL: 98/3 in 13 overs
Harshal picks up Mishara! That was the slower one again at 115.7kmph and its full and dips outside off. Creates distance between the bat and pitch. Shreyas Iyer takes a good catch. SL: 76/3 after 11 overs India take on Sri Lanka. (PTI Photo/Ravi Choudhary)
A reinvigorated India will look to pocket their second series win in as many weeks and build on the gains made from a drastic change in their batting approach in the second T20 International against Sri Lanka here on Saturday. India were forced to look in the mirror after their early exit from the T20 World Cup last year but four months later, they look a transformed unit with a bunch of youngsters being tried out in various positions and roles.
It is still early days but the Rohit Sharma-led side has already figured out the core group of players that will travel to Australia for the World Cup Down Under later this year. Young opener Ishan Kishan got a massive dose of confidence in the series opener on Thursday after his struggles against the West Indies.
Finding strike rotation tough in the preceding series, Kishan was able to overcome that weakness against the Sri Lankan bowlers besides flaunting the strokeplay he is known for in the IPL. There is no time to settle in a T20 game and India have finally realised that, allowing them to post 180 plus totals regularly.

Where to Go Ice Skating in Philly This Winter – Thrillist