Several critical lapses in fire prevention and life safety measures came to light in the Jamalpur petrol pump blast case on Sunday. In CCTV footage that spread just as fast as the blaze on February 15, the cause of fire, location of petrol pump, lax safety and possible inadequate training of staff have come to light.
The footage shows the fire started next to a vegetable vendor’s cart outside the petrol pump when he throws an object looking like a beedi on the ground. From there, the air containing fumes of fuel seem to catch fire right back till the tanker which was refuelling the underground tanks at the pump, owned by IOCL.
A customer is seen fleeing the scene shortly thereafter, dragging his two-wheeler away from the blaze which by then had reached the undercarriage of the tanker.
Staff at the pump are seen struggling with fire extinguishers before finally being able to operate them, but by then the fire had spread to the tanker, leaving the extinguishers useless.
Speaking on this, sources in the FSL said that reconstruction of the incident and subsequent viewing of security tapes had conclusively established that a possible leakage in the coupling mechanism of the hose had led to a large petrol vapour cloud forming close to the ground, which had rapidly caught fire as soon as it found an ignition source. The blaze then leapt to two empty containers of the tankers which also had a vapour cloud, possibly leading to the explosion.
As for a major tragedy being averted, the driver of the truck had sealed off the hose connected to the third container, which still had 2,500-3,000 litres of fuel in it. In addition, firefighters from Jamalpur fire station, just 300 metres away, also reached the spot fast after hearing the explosion. The petrol pump is located in a congested area adjacent to Shifa Hospital and a hotel.
Chief fire officer Rajesh Bhatt said, “The lapses at the petrol pump could have led to a major incident. We have informed IOCL officials that there are many petrol pumps which are located on the road like in Jamalpur. Others are near Khamasa, Raipur, Sarangpur bus stand, near Ellis Bridge, Relief Road and one near Drive-In cinema. These need to be removed. Also, pumps should not be serving customers while refilling.”
Danilimda PI D V Tadvi said, “CCTV footage shows a man throwing what appears to be a beedi. We have sent the video for further forensic analysis. Meanwhile, a team from IOCL Mumbai are also here to investigate the matter.”
The latest expose comes two days after the Gujarat government again brought all fuelling stations in the state under obligation to obtain Fire Safety Certificates (FSC) after seven months of confusion.

Problems identified
Petrol pump located on the road, very close to traffic
It was serving customers while tanks were being refilled
Vendors set up shop exactly in front of the petrol pump
Questionable safety measures during refilling of underground tanks
Employees unable to rapidly deploy fire safety equipment 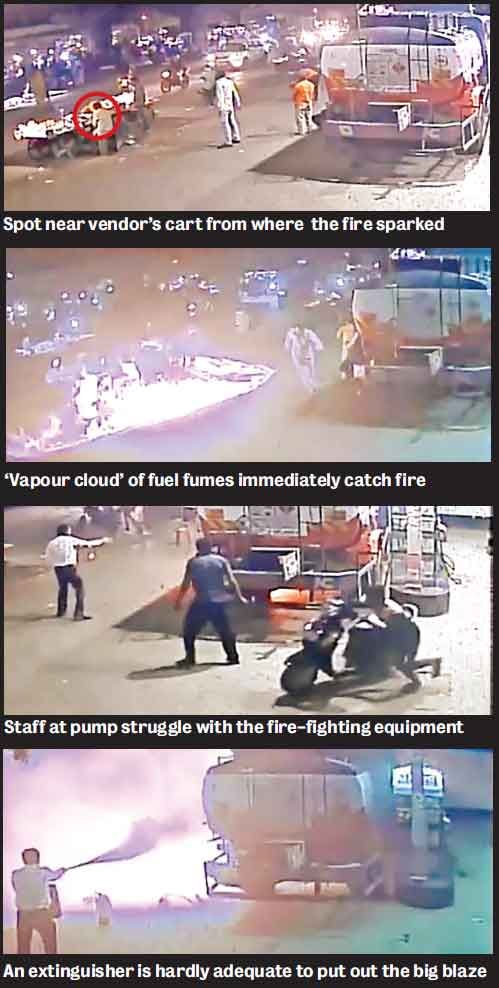 Every New Michelin Star Awarded to U.S. Restaurants in 2021 – Eater